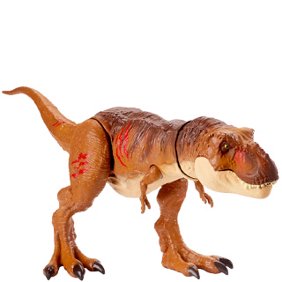 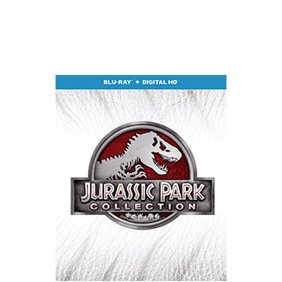 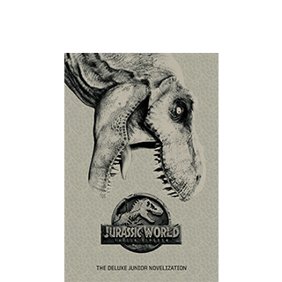 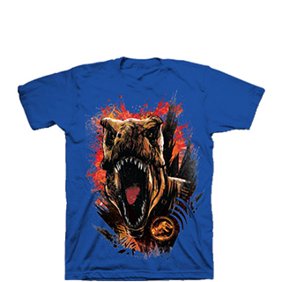 What started as an experiment with prehistoric cloning gone wrong in the original Jurassic Park movie has evolved into two trilogies of movies about a dinosaur theme park on a remote Central American island called Isla Nublar. The action-packed science fiction excitement continues with the fifth movie in the series, Jurassic World: Fallen Kingdom. For fans young and young at heart, there are plenty of ways you can add more Jurassic to your life beyond the movie theater.

Pull up a comfy T-rex throw blanket and pillow, make some popcorn, and pop in your copy of a Jurassic Park or Jurassic World DVD. You'll find movies on Blu-ray, 4K Ultra HD, or regular DVD to match your system. Or, digitize your experience by logging into Vudu or getting a digital code to purchase or rent your movie. Start with the first Jurassic Park for a movie marathon, or choose your favorite one. To watch the movies sequentially, follow this order:

The films are rated PG-13 and well suited for adventure-loving teens and adults, but younger children may be frightened by some of the violent scenes involving dinosaur attacks. Purchase movies individually or as a set of five for convenience.

Add Jurassic World tableware, such as paper plates, cups, napkins, utensils, and table covers to dine fully immersed in the dinosaur theme. Include party favors and prizes for guests that they'll enjoy taking home, like dino eggs that hatch into dinosaurs and "dino hybrid" ooze putty. Use Jurassic World gift wrap or bags to present a gift to a Jurassic fan, and delight party goers with delicious Jurassic Park edible cake toppers and fun cupcake rings.

Fans of all ages have a choice of Jurassic clothing to lounge in or add to their everyday wear. Send kids to school in a Jurassic World T-shirt or hoodie. Both boys and girls have a choice of colors and styles to suit their tastes. For a fun family photo, buy matching T-shirts and pose in front of a Jurassic World polyester backdrop, which is large enough to create a realistic scene.

Go all out with Jurassic costumes, whether for Halloween, a costume party, or just because. Inflatable velociraptor, triceratops, and T-rex costumes for adults let you look the part because of their massive size and battery-operated sounds. Fans are included to keep you cool, too. For kids and infants, dress in plush, zip-up dinosaur costumes to stay comfy while getting into the action.

Among the choice of exciting toys are Lego Jurassic World sets. Exercise your imagination by building a world that includes the genetically engineered Indominus rex and playing out scenes from the movies as well as creating your own. Plush Jurassic dinosaurs are safe and cuddly for infants and toddlers. Kids can also exercise their imagination and have hours of fun playing with Jurassic World dinosaur figures. Many of these toys have movable limbs so children can make them walk, grab things with their mouths, and swing their tails. Adding several Jurassic dinosaurs to a child's collection lets them create their own stories and plots.

You will receive an email shortly at:

Here at dxoffersmall.com, we are committed to protecting your privacy. Your email address will never be sold or distributed to a third party for any reason. Please take a minute to review our

How was your experience with this page?
(1 = Needs Improvement, 5 = Love it!)

We’re having technical issues, but we’ll be back in a flash.